Driving for a living has claimed more than a few backs. Braun Hudson is one of them. The day-after-day, six-days-a-week, month-after-month driving job exacted its revenge on Braun Hudson’s lower back.

The constant reach-and-pull of gear-shifting, the jarring potholes of Washington State In 2015, all of that stress came together, demanding payment in full from Braun’s back. 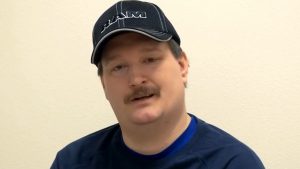 He woke up one night unable to move his legs.

A trip to his local hospital got him stabilized, but doctors prescribed pain medications and open back surgery as a follow-up. The drugs made Braun nervous – and the specter of open back surgery, even more so.

So what to do? Braun said he started looking for long-term solutions on the Internet, revealed a few possibilities, but the process took time – and required more tolls.

“There were multiple times where I couldn’t move at all,” he said. “I’d find myself on the floor, in tears, unable to move, for it seemed like hours.”

His family felt the pain too. He couldn’t take walks with his wife, couldn’t do his chores around the house and yard. Even worse, he missed more than a few of his kids’ games and school activities.

Then, he found Dr. Solomon Kamson on the Internet, and the Spine Institute Northwest in Bothell, Washington.

“I liked him right from the beginning,” he said.

“He said he didn’t know how I was still walking,” Braun said.

Dr. Kamson scheduled a minimally-invasive lumbar decompression surgery right away to relieve pressure on the nerves in Braun’s lower back.

Laughing now, happy to get back to his family, his job and his life, Braun said choosing Dr. Kamson and the Spine Institute Northwest was one of the best decisions of his life.

“I have absolutely no pain at all,” he said. “It’s a thousand times better than it was.”

He’s teaching his son to drive, got the yard cleaned up, and he’s back on the road earning a living and a life for his family.

“Give these guys a shot,” he recommends. “They know what they’re doing and they do it well.”

Watch Braun’s testimonial in the video below:

Keep Your Back Healthy and Keep Your Day Job