Sciatic Pain is a Thing of the Past – Penny Schwegel 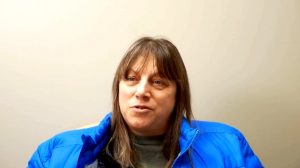 Penny Schwegel’s weightlifting stats are commonplace in her profession – but boggling for the common man. She lifts 90-ton boulders for a living.  And you think you’re tough?

Schwegel, from Fairbanks, Alaska, is an equipment operator for an Alaskan gold company. At 53, she’s been with the company for about 20 years, and drives an excavator. The tracked vehicle is equipped with a front shovel capable of moving tons of dirt at a time.

Schwegel sits in the operator’s seat for 12 to 13 hours a day loading 250-ton trucks. She uses all four arms and legs to direct the excavator’s direction and placement. Her legs control the massive shovel capable of lifting immense boulders.

“You’ve got these two engines behind you, you’ve got this vibration all the time,” she said.

She suspects that the constant vibration, jarring and long hours in the driver’s seat have been contributors to her sciatic pain. The pain radiates from her lower back through her posterior to her knees. She had been suffering for 10 years.

She’s relied on cortisone shots to relieve the pain, but their effectiveness has dwindled over time.

“I was getting shots every three months, and the shots would only last for a month, a month and a half.”

As long as she avoided the constant vibration, she might get two months of pain relief. But the vibration is part of the job.

She knew she needed to do something. She tried to hide her discomfort from her family, but they could see her pain, and knew when to lighten her load.

Still, the horror stories she’d heard of back surgery made it easy to wait, to grit her teeth and bear the pain.

“I was really scared about getting my back fused and worked on, because ‘What kind of movement and abilities would I get back? Will I be able to ride my horses? Can I go back to work?’” she said.

Ultimately, she decided to risk it.  She called The Spine Institute Northwest, underwent a minimally-invasive lumbar fusion surgery with Dr. Solomon Kamson just before Christmas in 2016, and is now pain-free.

She’s back to her family and her horses – cautiously.

“I have to rein myself in sometimes,” she said.

She’s looking forward to attending an annual horse show with her best friend, days that include several miles of walking. She says she’s up to it for the first time in years.

“For what they’ve done for me, there are no words,” she said. “They’re great.”

Watch Penny’s testimonial in the video below: