Anita Grooms has been battling through pain and numbness for 15 years. The 44-year-old mom of an 18-year-old and a wife, Grooms works as a dental assistant. The pain that she has suffered radiates from her neck into her shoulder and down to her left wrist. She says that she learned that her wrist pain was not carpal tunnel syndrome. Instead, the issue was caused by problems in her cervical spine that 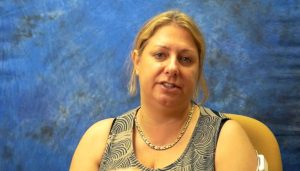 have been exacerbated by how she has to turn her head while standing over her patients, working on their teeth.

Grooms says that she has tried nearly every treatment imaginable over the past 15 years to help her symptoms. She says that she has gotten massages at least once a week to once a month for the last 15 years. She has also tried acupuncture and other treatments, but nothing helped to end her pain.

Finally, Grooms says she went to see her primary doctor, who referred her to a spinal surgeon. When she met with the surgeon, he reportedly told her that she needed to have three cervical fusion procedures in her neck. Grooms wanted a less invasive option such as minimally invasive back surgery or laser spine surgery, so she opted not to get the cervical fusion procedure that the spinal surgeon had recommended to her. Instead, she scheduled a consultation at Spine Institute Northwest.

Grooms was thrilled by the excellent communication and thoroughness of Dr. Kamson at Spine Institute Northwest. He recommended that she undergo a cervical decompression combined with stem cell therapy. Grooms says that Dr. Kamson’s bedside manner was amazing and that he took the time to show her exactly what was wrong instead of simply scheduling a surgical procedure. After discussing minimally invasive back surgery and laser spine surgery with her doctor, she opted to go ahead with the recommended spinal decompression and stem cell therapy. Grooms says that people who are experiencing back pain should avoid trying aggressive approaches and should instead select alternative options.

According to Grooms, “Whatever you do, do not be aggressive. If you go and do something aggressive, you can’t take it back.”

To learn more about how Anita Grooms was helped by cervical decompression and stem cell therapy, watch her testimonial in the video below:

The 21st Century Cures Act and The Future of Regenerative Medicine