Nobody expects an accident to happen, and when one does, the implications aren’t always clear right away. One day, package deliverer Glenn Steig opened up the back of his truck only to wind up buried beneath a mountain of packages. He finished his workday though, thinking he’d just pulled a muscle. 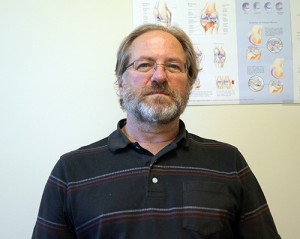 It turned out the damage was much worse. The next day, Glenn found that his leg was going numb. He eventually had to get a ride home, because he couldn’t drive — he could barely even walk. It was the beginning of what turned into constant sciatica in both legs. “My wife and I would go in for massages, and instead of the back massage I’d have them spend the entire hour on my legs, and on my sciatic nerve,” Glenn remembers. “And that would only alleviate it for an hour or two.”

Still, Glenn put up with the pain for years (as did his wife — “I felt sorry for her putting up with me,” says Glenn). Doctors had told him that surgery basically was his option, but Glenn put it off, not wanting to deal with a major procedure. Eventually though, he found that he could hardly get through any normal activity. “I thought ‘This is insane, I’m not going to go through my retirement like that,'” he recalls. “It was time to get it fixed.”

Glenn’s extensive research into his different surgical options led him to the minimally invasive spine surgery procedures offered at the Spine Institute Northwest. Meeting with Dr. Kamson put him at ease, and Glenn was able to get the surgery he needed — without the weeklong hospital stay he dreaded. Now 60, “I now have no pain in my legs at all,” says Glenn. “A little bit in one of my feet, and I don’t know if that’s just a foot injury itself, but I’ve got no pain in my legs. It’s a world of difference there.”

If you’re suffering from chronic pain, Glenn highly recommends you do your homework and check out all of your options — and whatever you do, definitely look into minimally invasive spine surgery.

Hear more of Glenn’s story, in his own words:

Keeping In Shape When You’re Over 65