Surgery Let This Police Officer Go Back to Work

Severe back pain made it very difficult for police officer Stacy Smaaladen to do her job. Physical fitness is important for a police officer, who might need to sprint after a suspect or be involved in a physical altercation. Smaaladen couldn’t even stand up straight and had to go on light duty. “I heard all the calls that they were going to, and to not be able to go and help like I used to was really hard, because I’m a real team player.” The pain really limited her ability, she says. “The pain was going down my right leg all the way to my foot and I couldn’t stand up straight; I was bent over at the waist.” 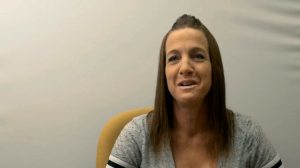 Although she tried a variety of conventional therapies such as the application of heat and ice, and also tried chiropractic care, nothing seemed to help. She was unable to ride her horse – one of her favorite leisure activities. “I ended up not being able to ride my horse for nine full months.” The pain had a big effect on her mental outlook as well. She was afraid of losing her job and of the possibility of permanent disability. Smaaladen struggled with depression and anxiety. “You feel like you are in a dark place and there’s nothing that’s going to solve it.”

That began to change, however, when she contacted the Spine Institute Northwest. Smaaladen says she would recommend that anyone with back problems call the institute, because they’ll feel better immediately. “The minute somebody answers the phone, you’re going to feel a lot more at ease. I’ve never really called any doctor’s office or hospital and never really felt that.”

Both Dr. Kamson and the anesthesiologist spent time with Smaaladen to explain procedures and what they were going to do. “Dr. Kamson said exactly what he was going to do – he was very upbeat – like they always say, ‘bedside manner’ was amazing.” Smaaladen had previously had surgery and was particularly anxious about the anesthetic. Her fears were allayed by a face-to-face conversation. “I got to talk extensively with the anesthesiologist, which I’ve never really done that in past surgeries. He was really nice and told me exactly what he was going to do.”

After the surgery, Smaaladen began the process of recovery. The incisions from minimally invasive back surgery heal within a week or two, but most patients have weakened muscles, and their cardiovascular reserve (another word for endurance) is typically low because their activities have been limited by pain. Smaaladen began by walking – slowly at first, and doing no more than she could tolerate. Eventually she was able to jog, and as she continued to increase her activity, she gradually became fit again. The day she was finally able to take a horseback ride was cause for celebration. Now she rides regularly, and even long rides leave her with only minor symptoms. “If I overdo it, riding my horse, I may be a 1-2 [pain level], but I just do some ice and relaxing, and it goes right back to a zero.” Going back to work was the best experience. “When I had the sheet of paper that signed me off to come back to full duty and gave that to my deputy chief – that was really good.”

Smaaladen says she advocates for others who have back problems. Her own experience was so positive, she says, that “I talk to people and I mention the Spine Institute Northwest all the time. I would give them the phone number for here and literally sit there with them and say, I will walk you through it.” If you have back or neck pain and are looking for a solution, contact Spine Institute Northwest for an assessment. You can reach our patient advocates at 888-712-0318.

Treating Chronic Back Pain With Acupuncture

Is There Really Such a Thing as “Texting Neck”?