A Spinal Fusion Solved This Back Problem

The first symptom Emmett Hoyt noticed was that his leg began dragging when he walked. “My right leg began to gimp… it was dragging, and I couldn’t figure out why. I thought I’d had a stroke. I couldn’t make it to the bathroom. So, I had to call the doctor.” The symptoms Hoyt noticed didn’t result from a stroke, however. He had degenerative disease of the spine, which had caused three discs to collapse. Discs are thick cushions of cartilage between each of the spinal bones (vertebrae) that act like shock absorbers for the spine. They can become damaged and push out into the spinal canal, putting pressure on the nerves. Hoyt had so much pressure on the sciatic nerve – 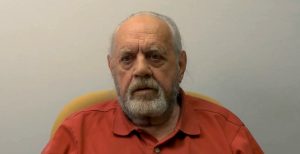 the major nerve that runs down the leg and controls function and feeling – that the nerve signals were impaired.

The surprise for Hoyt was that he didn’t hurt. “I had a pinched nerve and three discs that were collapsed, and they pinched a nerve. And I said, how come I haven’t got pain? He said: ‘Well, it’s good and bad you don’t have pain. It’s the good part that you don’t have pain; it’s bad because it’s pinched so hard that it can’t give pain’.” Emmett Hoyt is a veteran, and could have gotten treatment at the local Veterans Administration hospital. Spine Institute Northwest was a better choice for him, however. “There’s a lot of positive things about the Spine Institute that I found when I researched it, and I was very comfortable with the doctors when I met them personally. They were very personable, I wasn’t treated like a number. Everybody’s very polite, very caring.”

I could have had it done at the VA. I wouldn’t have had the same results that I had here, because you’re specialists.”

The physicians’ experience was another important factor – Hoyt learned that patients who have surgery done by more experienced physicians typically have better outcomes. “I looked at each doctor and they had tremendous credentials and experience, they’d had hundreds if not thousands of operations done, so they were well experienced. I could have had it done at the VA. I wouldn’t have had the same results that I had here, because you’re specialists.”

Unlike other patients for whom minimally invasive surgery means just that, Hoyt required a spinal fusion. The body can compensate when only a single disc is involved, but three damaged discs meant Hoyt’s spine needed more support. A spinal fusion uses bone grafts, small metal plates and screws or synthetic bone material to support and stabilize the spine. He also needed physical therapy, as the nerve damage meant the muscles in his leg had weakened. A spinal fusion also limits flexibility in the spine, and physical therapy can help patients learn to move differently to protect the fusion and decrease any residual discomfort. “They’re all impressed that I healed as much as I did within a year. Most of my leg is back about 75 percent and the doctor is arranging some more physical therapy that could bring it back quicker.”

Hoyt stresses that it’s important to find a doctor who will answer questions and explain everything a patient needs to know in order to understand their condition or make decisions. “… here in Bothell, they’re very down to earth, they explain things, they take the time. If you have a question they let you know what the answer is. I haven’t had a question yet that they couldn’t answer correctly.” He adds, “The main thing is when you talk to a doctor and if they’re talking way over your head and you don’t know they’re talking about – get another doctor.”

Spine Institute Northwest is a good choice for those who suffer from back problems. Our specialists can offer a wide array of treatment options to help with pain or disability, using minimally invasive techniques. Emmett Hoyt stresses: “Don’t put up with pain, you know, get it done.”

If you’d like to learn more about minimally invasive surgery, please contact one of our patient advocates by calling 888-712-0318.